Some are mushy, some fall apart on your fork, and they all fall apart left over the next day. But who is the best? Leave a comment to vote for your favorite, or add another brand into the running.

#1. Le Veneziane (Corn based) – this is my favorite by far. It comes in multiple shapes, including bow ties (fettuccine is my favorite). Not only does it taste like real pasta, but it tastes almost like home-made pasta. Does not get too mushy and holds its shape well.

#2. Bionaturae (Potato based) – Runner up. Also comes in a bunch of shapes (ziti is my favorite). Tastes like real pasta and holds its shape well. Not too mushy or slimy.

#3. Quinoa Ancient Harvest (Quinoa based) – A nice bouncy texture that will hold up well in a baked pasta dish or Mac and Cheese. They have good shapes for baked pasta,like shells. No slime or mushiness.

#4. GoldBaums (Brown Rice based) – A very decent pasta, especially in its elbows and other curly shapes. A little mushier than #1 and #2 but it doesn’t have the layer of slime normally associated with brown rice based pastas. Good for a Pasta e Fagioli.

This is one of the easiest appetizers to create, and always seems to be the first to go at parties. If you have a nice sweet and spicy jelly, like the one by Stonewall Kitchen pictured above, you don’t need much else to create a delicious gluten free appetizer.

So easy, and so yummy.

This past thanksgiving my Nana decided to try a gluten free version of her famous lemon meringue pie recipe. This was my absolute favorite dessert growing up, and the gluten free version did not disappoint! It was SO GOOD I literally sat down and ate about 1/4 of the pie straight from the pie dish by myself (evidenced in the photo below). Because it looked so delicious, a lot of folks asked for the recipe….

So I have to be honest here, when I called her up for the recipe, prepared to take copious notes for you all, her response was “I’m not sure off hand – I just follows the directions on the container for Durkee Lemon Meringue Pie Filling”. WHAT!? Lies, my whole life has been lies.  The good news – Durkee has a fairly easy recipe to follow, and you’ll never have to look up the recipe if you’re using their brand.

I recommend either the Whole Foods pre-made gluten free pie crust or Pillsbury Gluten Free Pie and Pastry Filling Dough.
Because this is a pie served cool, bake the empty pie crust at 375 for 10 minutes or so, until the top edges are veryyy slightly browned.

– Get out your medium sized sauce pan: Combine filing mix, 3 Tbsp. sugar,  1 egg and 2-1/2 cups water; stirring until smooth.
– Cook over Medium heat, stirring constantly, until pudding comes to a boil: boil 2 minutes. (Pudding will thicken upon cooling)
– Pour into pie crust (which has already been baked) and place in the fridge to chill.

– Beat 2 large egg whites and 1/4 tsp. cream of tartar with electric mixer until soft peaks form.
– Gradually add 1/4 cup sugar, beating at high speed until sugar is dissolved and stiff, glossy peaks form.
– Immediately spread meringue over hot pie filling, carefully sealing meringue to edge of pie.
– Bake 5 to 7 minutes or until meringue is golden. Cook on a wire rack if you can – and then cover and store in refrigerator to cool before serving.

Yum, this is one of my favorite holiday pie’s. A tart and sweet cranberry pie that is very easy to make (no mixer needed!), but still looks  very impressive  on the table. I tried Pillbury’s gluten free pastry dough, and it is my favorite gluten free dough so far. It comes in a 15.8 oz tub which is enough for two 9″ pies. I have gotten a lot of questions about the “healthyness” of this dough – let me warn you by saying this is a Pillsbury product and is in no way intended to be a “healthy” option.  Although eating gluten free can lead to a very healthy diet, Gluten-free is not synonymous with fat-free…

FILLING:
– Mix all ingredients in mixing bowl (the order doesn’t matter, and you can use a spoon or egg beater  to mix it all)
– Pour into shell
– Top with criss-crossed dough lattice (if your pieces break, just lay them on the top of the pie so they touch, when the pie bakes they will all stiffen together and look like on piece)
– Bake at 375 for 45 minutes (up to an hour) – until lattice and edges turn light brown
– Let pie cool before serving (serve room temperature)

Some exciting news in the gluten free world! The Food and Drug Administration has passed new mandates for the voluntary labeling of “gluten free” products. Some additional details are below (in an email I received from We The People) , but the gist is that food manufacturers have 1 year to comply with the new regulations for adding the words “gluten free” to their food labels. Although most products with gluten free labels are in fact gluten free, this new regulation will guarantee that any unavoidable presence of gluten in the food must be less than 20 ppm.

THANK YOU to the 40, 639 people who signed this petition!

By Michael R. Taylor, Deputy Commissioner for Foods and Veterinary Medicine at the Food and Drug Administration

Thanks for your petition. The Food and Drug Administration is a science-based, regulatory public health agency, and as we make determinations on food labeling, we take time to ensure the final standard is the right one.

We’re pleased to share that on August 5th, 2013, the Food and Drug Administration published the final rule defining the term “gluten-free” for voluntary food labeling, setting an enforceable standard that will benefit people with celiac disease, as well as those with gluten sensitivity.

Manufacturers that use “gluten-free” on their food labels must ensure their foods are either inherently gluten free, or do not contain an ingredient that is:

Also, any unavoidable presence of gluten in the food must be less than 20 ppm.

Manufacturers have one year to implement this rule, meaning all manufacturers using a “gluten-free” claim must ensure their labeling is in compliance with the final rule by August 5th, 2014.

It’s important to note that many foods currently labeled as “gluten-free” may already meet the new federal definition, but this rule will ensure greater consistency in labeling – and that’s good news for consumers.

Tell us what you think about this response and We the People.

Stay connected to the White House by signing up for periodic email updates from President Obama and other senior administration officials.

NOM nom Nom.. I love anything buffalo flavored. I also love cheese. And my crockpot. So when I have an excuse to make a party dish like this, I pretty much eat the entire thing…which is not good, because *warning* this is not a healthy recipe.

(Corn chips or celery for dipping)

-Place chicken breasts, butter and hot sauce into the crock pot. Set on High.
-Once the chicken starts to soften, pull it apart with two forks, creating pulled chicken.
-Let chicken continue to soften, and once it begins to look stringy and pulled, add in cream cheese, cheddar cheese and dressing.
-Mix together until totally blended. You should see the chicken start to really break apart
– Once it starts to bubble around the edges it is ready to serve

Directions for stove: (I don’t use butter in this version)

-Boil chicken breasts in water on the stove.
-Once chicken is cooked  (10- 15 minutes depending on thickness), remove from water and set aside to cool.
-Preheat oven to 375.
-Once cool, pull it apart with two forks, creating pulled stringy chicken.
-In a large mixing bowl add cream cheese, cheddar cheese and dressing.
-Mix together until totally blended, then pour into glass/ceramic dish.
-Bake dish on 375 for about 15 minutes until dip is heated through
-Switch to broil for 1 -2 minutes to make the top crispy. Watch it while the broiler is on! It can burn quickly.

Serve it straight from your crock pot/baked dish with corn chips ….or celery if you’re being “healthy”. 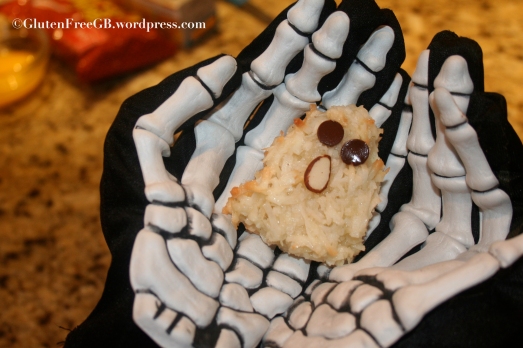 Oh man, I am so excited for Halloween!  Can’t wait to start making these spooky treats. These are not your typical puffy pastel macaroon, but this is a family macaroon recipe that has always been gluten-free… and it is also super simple, fun to make, and most importantly… it’s delicious!

– Mix all your ingredients together
– Once your ingredients are all mixed, start making ghosts!
– The batter doesn’t spread too much when it’s baked, so shape them just slightly smaller than you want in the end. I use roughly a golf ball of batter for each, about as much as you can pick up with an overfilled melon baller. Shape them into cone like ghosts, with a flat bottom, and rounded top
– Cook on 325° for 20 minutes, or until edges begin to brown
– They will be gooey when you take them out, so quickly put in (gluten free) chocolate chips upside down as eyes, and gently push in a sliced almond as a screaming ghost mouth
– Refrigerate before eating – they will turn chewy and delicious! 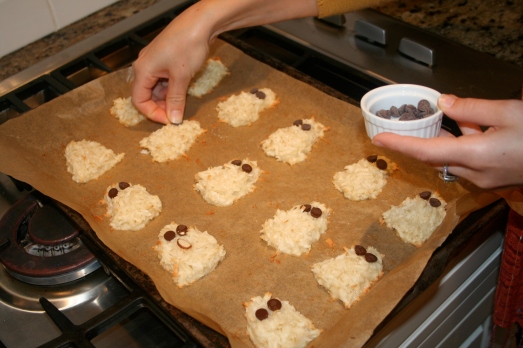 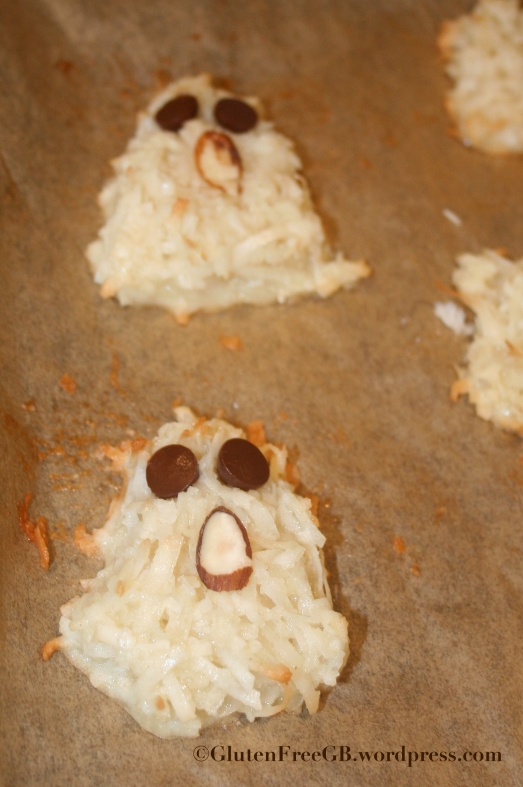 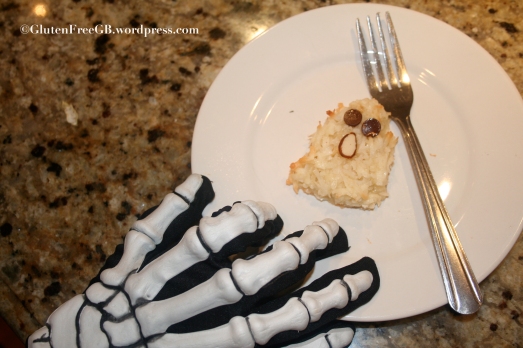 I went apple picking with my family last weekend, which was great! One minor issue though –  I don’t really care for apples…but, lucky me, they had a few pear trees sprinkled throughout the orchard. So I stocked up on pears and now I have more than I know what to do with. 1st recipe on this list… Pear custard pie.

This is a Martha Stewart recipe, with one little conversion switching to gluten free flour.

This recipe was found here on Martha Stewart 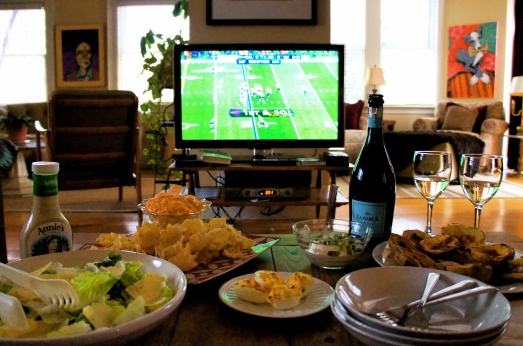 It’s football season! This year I have tried to embrace more than just the game-day cooking, and joined a fantasy league with my friends from college. I am very proud to say I am currently number one in my league,  5-0-0 woot woot! But the food is still my favorite part 😉

Here are some of my favorite gluten free game day foods:

Crumbs bakery has opened an entirely gluten free shop in NYC! So, basically… I have to move to NYC now.

They’ve been open for less than a week, and the bakery offers  “the same cupcakes, cookies, brownies and pastries that the brand is known for in gluten-free versions. This new assortment is baked at a completely gluten and peanut-free bakery and delivered fresh daily to the store. In addition to the cupcakes and pastries for which Crumbs Bake shop is famous, Crumbs Gluten Free will also offer gluten-free breads, quiches, pies, tarts and more“.

If you’ve never heard of crumbs, their cupcakes are supposed to be amazing… although I have never been able to try one myself. Looking forward to changing that soon.